Aubrey Dunn has held a New Mexico Real Estate Brokers License for over 40 years. In recent years he has mainly purchased and sold his own properties. He was elected Land Commissioner of New Mexico in 2014 and served from 2015 through 2018. As Land Commissioner he oversaw the management of New Mexico’s 9,000,000 surface acres and 13,000,000 mineral acres. Aubrey Dunn is a native New Mexican, born in Alamogordo and raised on an apple farm in the small mountain community of High Rolls in Otero County. He is a 1974 graduate of Alamogordo High School and he attended Colorado State University where he earned a bachelor’s degree in animal science. Mr. Dunn’s keen business sense lead him to the banking industry where he worked for 25 years, the last 10 of which he served as CEO and President of First Federal Bank of New Mexico. During his successful banking career he developed a commercial loan portfolio of $170 million; merged a $200 million acquisition and became a public company; grew revenues from $1 million to $3.5 million in seven years; increased demand deposits 230% to $150 million; increased savings accounts 300% to $80 million; increased commercial loans 460% to $170 million; increased earnings per share by 50%; and, increased stock value while he served as president from $2.75 to $24.14. He is also a cattle rancher and has owned 13 ranches throughout his life. He now owns and operates the Gran Quivira Ranch between Mountainair and Corona. Both his business and agricultural background have prepared him for his role as State Land Commissioner and inspired his innovative policies to diversify the State Land Office’s portfolio, increase assets, and improve conservation efforts. Mr. Dunn was a member of the Western States Land Commissioners Association, which consists of 23 states that together manage 447 million acres of surface estate, minerals properties, and land beneath navigable waterways, all held in trust for public education in our respective states. As State Land Commissioner he served on a number of boards, including: New Mexico State Investment Council, Youth Conservation Corps, Capital Building Planning Commission, Coal Surface Mining Commission, Mining Commission, Oil Conservation Commission, Office of Interstate Natural Gas Markets, Natural Lands Protection Act Committee, and Rangeland Protection Advisory Committee. A dedicated public servant, Aubrey also serves on the Board of Directors for the New Mexico Coalition of Conservation Districts and is a district supervisor and past chairman of the Chaves County Soil and Water Conservation District. He is a past board member of the New Mexico Farm Credit Association, Alamogordo Chamber of Commerce, Roswell Chamber of Commerce, and the New Mexico Banker’s Association, among many others. Aubrey and Robin, his wife of 38 years, share three children, A. Blair Dunn, an attorney; Dr. Jamie Dunn, an optometrist; and Jed Dunn, a range specialist with the National Resources Conservation Service.

$11,808,000  •  26,240 acres
Priced @ $450/deeded acre! Gran Quivira Ranch is located in the center of New Mexico and provides a unique opportunity to invest in Ranch Land. The 28,160 acres are located 31 miles south of Mountainair, 7 miles north of Claunch, 20 miles northwest of Corona, New Mexico. It is 120 miles southeast of Albuquerque and an equal distance to Santa Fe or Roswell. The ranch is nestled in the foothills of the Gallinas Mountains and has views of the Monzano Mountains to the northwest, with elevations ranging from 6,200 to 6,600 feet. The East Cibola forest borders the ranch to the north and Highway 55 borders a four mile section on the southwest. The headquarters is approximately 4 miles from Hwy 55. The ranch is contiguous within three counties, Torrance, Lincoln, and Socorro.
Mountainair, NM - Torrance County
ranch4sale.com 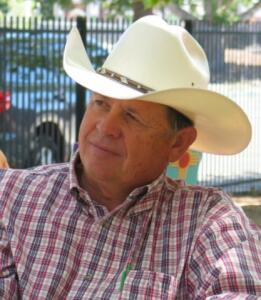