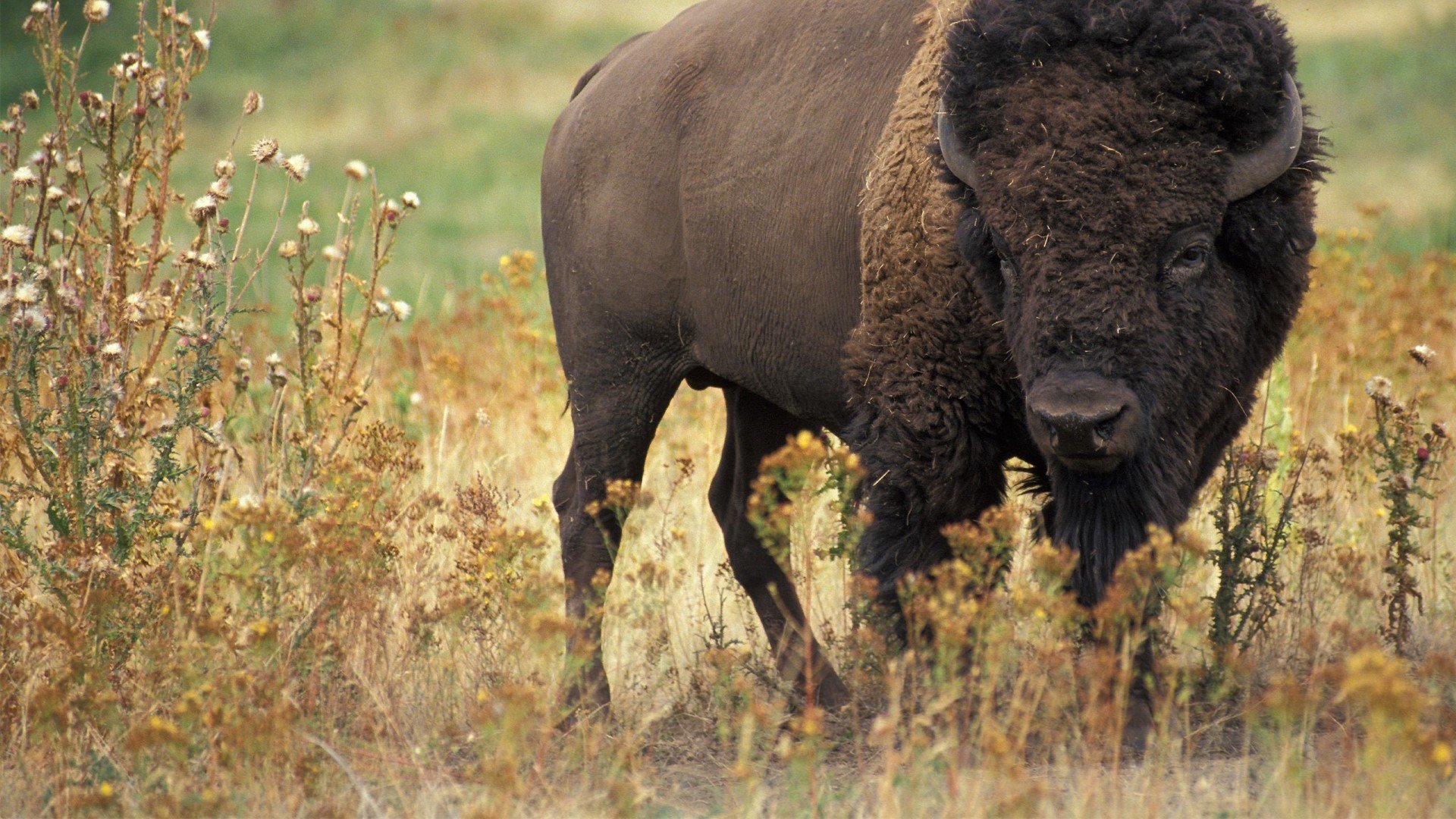 Bison, otherwise known as buffalo, can be feedlotted if you place several in a small pen and feed them there daily. But this is a wild animal that always does better when they are allowed to graze wide, open pastures of their own design. These places should have lush, natural browse and can be complemented by hay feeding throughout the day. This is the most appropriate land for bison.

In the end, the entire range of land should be big enough to handle a large herd, typically at a ratio of one cow-calf pair to five to 10 acres of grass. The best land in which to settle will depend on yearly rain and local grazing potential. Bison also need access to fresh, clean water on a daily basis. If there is no live water that naturally travels to the land, like a creek or a spring-fed pond, ranchers will need to drill a well, install a water pump or a windmill and supply a stock tank for watering.

Fencing will need to be installed. For bison, the regular three- or four-strand barbed wire is not enough. Like both emus and ostrich, bison will need fencing installed that is at least six feet in height. This means taller posts than normal and typically six lines of fencing.

In order to make a sufficient purchase of bison, rates will adjust in value according to the economy, as well as the demand. According to the study in agronomics, the investment per bison cow (one cow and approximately 10 percent of one bull) ranged from $1,400 to $4,200 per cow in increments of $400 per cow. The bull calf price was fixed at $700 per head while the heifer calf prices ranged from $900 to $2,500 per head in increments of $400. In addition, local ranchers or well-known auction houses may have excess stock that they are willing to sell. Find the local market price by asking around and paying attention to auction values. Start with a small herd that can be easily managed until you are more confident.

Once the bison are purchased, keeping them healthy is always key. Like cattle, they require regular vaccination against common diseases such as brucellosis—a bacterial infection that spreads from animals to people often via unpasteurized milk, cheese and other dairy products. Animals that are most commonly infected include sheep, cattle, goats, pigs, and dogs, among others. A local veterinarian will stock these vaccines and it is recommended they are called to the farm to help vaccinate the herd. For bison, corrals and a chute are needed to safely vaccinate the bison. During the vaccinations, they can also be dewormed.

As a rule of thumb, one should sell your calf crop yearly and build the herd. Keep some calves back for replacement heifers; they are essential to help build the herd. The remaining calves will need to be weaned and then transported to the local auction house for sale. Bison are well known for their meat, but their thick hides can also be sold for both skins and coats.

Ranching of bison is much like cattle, but the process is often much simpler simply due to the fact that bison rarely need to be micromanaged. A healthy herd of bison that has sufficient rangeland will—for the most part—care for themselves and do not suffer so much with the daily needs like a herd of cattle. This is the benefit of returning a native population back to its natural lands and allowing them to prosper as they had for thousands of years.

Bison meat is quite popular, but its cost and demand rise and fall like any other red meat, to its current demand. While it is thought to be leaner and generally healthier than regular steak or ground beef, there is no official statement that can be backed with evidence, or a statement from the USFDA that currently makes this fact. However, its demand is enough that its found in a variety of local restaurants, specialty food stores and those who sell it online.

When looking to ranch, one does not always have to look to cattle to make a living. As a beginning rancher with a limited budget, staff and time and effort, some of the smaller and lesser-known ranching opportunities might present the opportunity to get one’s foot in the door without become instantly overwhelmed by a market that is already saturated with both sellers and buyers. It’s always interesting to note that different animals are being explored for their harvesting value and the economy has shown that it is willing to make a place for possible expansion should the need and demand arise.