High Point Ranch is a 2070 acre working cattle ranch in western McIntosh County, just seven miles south of I-40 and four miles east of the Indian Nation Turnpike, making the ranch a short one hour drive from Tulsa, 90 minutes from OKC and three hours from Dallas straight up Highway 75 and the turnpike.

Not all ranches are created equal. While there may be some debate of which features are the most important, there are a few that are on everyone's list. Great fences, ample water, and fertile soils are the basis of a functioning ranch. Ranch houses, shops, barns and working pens are also at the top of the list. Beyond that, there are the intangibles that really make a ranch desirable. Big views, elevation changes and glorious sunsets add something to a ranch that can't be quantified financially even though the mental impact of these features is enormous. The awesome skyline of the ranch is due to it being located at the highest elevation in McIntosh County. In addition, the horseshoe shaped high ground of the ranch wraps around the bottomland of Shell Creek allowing you to survey almost the entire property from the porch of the eastern ranch house. We caught a beautiful sunset while on the property filming and even though we had been filming for over 9 hours, we had to stop and just soak it all in. We can easily imagine the beauty of the sunrise breaking over the far eastern ridge every morning. The beauty of this place would never get old.

High Point Ranch is a mixture of land types that you only find at the interface between the American South and West. Big drainages with deep soils support a growth of massive timber while high ridges are blanketed by a natural grassland. The topography not only provides for beautiful views but also protects the livestock from cold north winds in the winter. These south-facing slopes are sure to absorb more sunshine in the late winter and with prescribed fire could offer you an opportunity to jumpstart forage production in the early spring.

Speaking of fences, all but a small portion of the ranch is included inside the high fenced perimeter of the combined High Point and Canadian River Ranches. The adjoining 11,084 acres of the Canadian River Ranch is also for sale if you have the appetite for a 13,000 acre plus contiguous ranch. The boundary between the two ranches is a typical barb wire fence.

Of course, water is important, and the ranch boasts a 10-acre lake plus at least a dozen smaller stock ponds in addition to 2 miles of Shell Creek. The lake sits in a high draw on the western edge of the ranch. Almost completely hidden until you make the final approach, this clear water lake is a beautiful site to behold. The presence of fishing boats leads us to believe the fishing is good. The lake also serves a practical purpose as the source of water for the drip irrigation system in the creek bottom and the livestock water tanks.

Most of the Class 2 and 3 soils are in the western and northern high ground in addition to the creek bottom near Shell Creek. The southern pastures also double as hay meadows. Areas near the lake and all along the eastern ridge remind you of a landscape you might see in New Mexico with native grasses and smaller trees. We also noticed hunting blinds, food plots and feeders in these areas. There is little doubt that this part of the ranch holds significant wildlife populations.

Lastly, there are two ranch houses, a sale barn, three shops/barns, and four sets of pens. These improvements are functional but could use some TLC. As always, Land Doctors Construction would be happy to provide estimates for whatever changes and repairs you might want.

If you are looking for a ranch that is not only productive but also beautiful to behold, then give Kelly Hurt at call at 580 421 7512 to discuss or set up a showing. 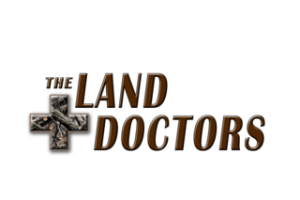 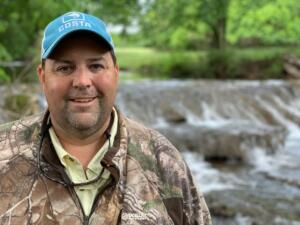